The Last Supper with Rob Dewalt 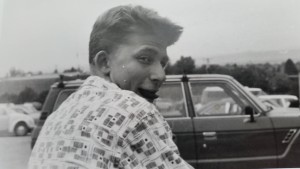 In the fall of 1983, I was living a charmed life for a sprite of 13. I was the class President of the Middle School at Santa Fe Prep, my grades were good, and I enjoyed a popularity that extended beyond my years to some “cool kids” in the junior and senior classes. And in walked Rob Dewalt, a “new kid” in the freshman class, already a bright and sharp-dressed teenage hipster with an eye for fashion and a jumble of band buttons clustered on the lapels of his torn-up denim jacket.

The Clash was all that I recognized, but with names like The Buzzcocks, The Sex Pistols, and especially, The Dead Kennedys, (for real? Like…wow.) – and an oddly shaved hairstyle that was between a flat-top and a Mohawk suggested that the new kid was a lot cooler than the rest of us, maybe even a punk rocker, you know? And for awhile there, I not only wanted to know Rob Dewalt, I wanted to be him.

As much as I wanted to be Rob, I think he wanted to be me too – we had a mutual admiration club going on that began as teenagers and spread across 33 years, taking cues from each other as we traversed the difficult terrain of adolescence and early adulthood, and then further on as we became professional colleagues. On a lot of levels, Rob and I were cut from the same cloth – we liked anything current or cutting edge, particularly music, and we both dreamed of being artists – in our minds, actors first, then musicians, and then, writers.

Like others in our generation who grew up in Santa Fe, we wanted to write about the city we loved to have a hand in shaping it. By the miracle of persistence, and a willingness to accept the difficult trade-offs of writing here, we made our dreams come true – but at a price. In a city made famous by number one travel destination awards, Conde Nast spreads of beautiful homes and golf courses, and expensive rents, cocktails, hotel rooms, and health care costs often beyond our reach, we learned very early on that access to everything from art to concerts to restaurants to famous people traipsing through town didn’t always result in a “living wage,” and when I last saw Rob in 2013, he was just beginning to learn about the real rigors of the freelance game – and I would learn that it was taking its toll.

When I last saw Rob, in April of 2013, it was like a divine accident. I had four jobs – double-timing as a freelancer for two different sections of The New Mexican, salaried as the arts editor of The Weekly Alibi in Albuquerque and also selling ads for The Alibi (and still making less than $24K a year total.) For one of those gigs, (and certainly breaking the rules of one of the others) I was approached by the marketing director of a four-star hotel in Santa Fe and invited on a minor junket: a tour of the historic hotel, free drinks at the bar, dinner on the house, a comp room and free parking. As we were talking, I happened to mention that Rob Dewalt and I were old friends. Apparently, I was out of the loop on how influential the writer of The Fork (which at the time was a blog for which Dewalt was unpaid) had become, and her eyes lit up as if I’d said I was related to Anthony Bourdain.

“Do you think he’d like to join you?” she asked, almost innocently, but both of us knew better.
Nothing delights a food writer – or any writer, for that matter – then the prospect of a free meal and a gratis open bar. Surely I could share the wealth with my old pal – but never for a moment did it occur to me that this splendid happy meal would be the last I’d ever enjoy with my old comrade.

I was seated at the bar when he entered the room, dressed for success in an outfit that was nostalgically new wave and complete with one of his many hats. I observed with quiet alarm that my old friend with whom I’d smashed into in many a slam pit before the word “mosh” was even invented was grey around the temples and walking with a cane. Then, as now, even at 46, I so rarely have the opportunity to see myself as aging, but in my friend’s gait and in the lines in his face, I could see that he was aging even if I felt I was not. And still, it was so good to see my old lover of the mind and to recognize that both he and I had done exactly what we set out to do as youngsters. And where I was still the trouble maker – and he was the one with the better record collection – both together and apart we had devoted our lives to the city and state that we so loved – and applied our skills as writers to help shape it.

The marketing director hovered briefly over drinks, just long enough to seal the deal on a solid rolodex connection with my dear friend, now an influential food critic in a city built on the industries of Art & Lunch – before making a timely leave to allow us time with the bartender’s adroit mixing skills and a quiet dinner alone. The meal was no doubt fantastic, some well-presented stack of dainty vegetables and hearty meats on an expensive designer plate, but I have no memory of it, lost in the company of the man before my eyes whom I had known nearly all my life.

Culture writers lead strange but interesting lives. We may break new artists, but we don’t create them. We follows trends and personalities and try our best to shed light on what has value in our minds based on taste and experience and our impressions of the talent in front of us. And at some point, we retire, because we’ve seen every band, heard every DJ, eaten at every restaurant, and seen more art than we ever wanted to look at – and we’re tired that the bottom line doesn’t add up. The hard part is when we reach the end of the line but it’s really all we know to do to pay the rent – because after all, it was never about the money. It was about pulse, discovery, and promoting what you love. Stop loving it – and the music takes on a different tune, and the emptiness can be unbearable.

Somewhere in my archives, I have a letter from Rob written in his first year of college at University of Colorado at Greeley. He writes, “music is my love – but writing is my passion. I want to write and write and write until my hands bleed.” Both together and apart, we saw our dreams come true – writing for the city we loved, yet bleeding also, for what we believed in most of all.

Soon after this meal, Gregory Pleshaw publicly resigned from every NM media related job he had, and went into a recovery program in Colorado before moving to California. He now has plans to go back to graduate school to continue his studies in psychology and consciousness, to solidify years of research on the multiple mental health diagnoses and mystical experiences he has experienced for most of his adult life.

{editor’s note: there are many reasons why a person decides to take their own life, and no doubt a bevy of pressures on my friend Rob Dewalt when he chose to do so on April 5, 2016. Based on my most recent conversations with him before he died, I chose to focus on the economic issues of maintaining our chosen profession. I cannot claim to know his true reasons, and when I wrote this piece – for the New Mexican, who chose not to run it over word length issues – the issue of cause of death was being held to family and close friends. At this point, it seems an open secret, and I have chosen to run this piece here, but originally on my Facebook wall.}